In the United States, the 1960s and 1970s proved to be a time of rapid social change, particularly with significant shifts in sexual and gender latitude. Second-wave feminists championed white women’s sexual issues like access to abortion and birth control as part of their larger bid for gender equity. Gays and lesbians challenged the supremacy of heterosexuality and exposed gender roles as socially constructed. Transgender people also highlighted the performative and cognitive nature of gender. Bisexuals have further destabilized the mix of gender and sexuality by downplaying the gender of their romantic partners.

Finally, social and economic conditions have contributed to increasing the autonomy of women and sexual minorities, particularly white gays and lesbians. Industrialization, shrinking families and the separation of sexuality from procreation allowed women to have fewer children, and gays and lesbians to develop urban enclaves. Polyamory evolved as a direct result of the sexual revolution and combined with the bisexual and free love movements. Like other aspects of the polyamorous community, however, the history of the movement has some points of contention.

Research on group marriages and swinging peaked in the 1970s. By this time, the sexual revolution had popularized sexual experimentation and the concepts of open and group marriages had gained prominence. American culture was more sexually permissive than ever, and the specter of AIDS had yet to invade the playful sense of sexual experimentation. Those involved in group marriages of three or more partners who all considered themselves married and volunteered to participate in the research tended to be predominantly heterosexual or bisexual and white. It is highly likely that many other people have also had relationships with multiple partners and have simply not been involved in researching them.

Swinging research similarly flourished in the sexual adventures of the 1960s and 1970s, documenting new trends in extramarital or co-marital sexual involvement. Studies have examined the race and ethnicity, social class, education, and political outlook of swingers. This research created a profile of swingers as middle and upper class non-religious white people in their late thirties. 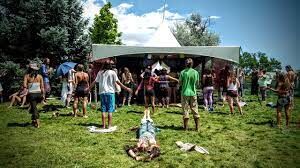 The communal movement, which had waned in the United States in the late 19th century, reemerged in the form of communes in the 1960s and 1970s. Similar to the transcendentalist communities of the 1860s and 1870s, the communes of the 1960s and 1970s offered a refuge from the disillusionment of the dominant culture and the hope of a more satisfying life with a group of like-minded people. Commons often emphasized the value of intimate relationships, personal growth, spiritual rebirth, returning to nature, rebellion against the establishment, and cooperation rather than competition. Many communities included some form of atypical sexuality, from celibacy to free love, although only a minority of contemporary communes endorsed sexually non-exclusive relationships.

Kerista, perhaps the most influential non-monogamous, proto-polyamorous intentional community, was based in the San Francisco Bay Area between 1971 and 1991. Comprised of approximately 25 adults at any one time, members of the Kerista community lived in separate group marriages or a single large group marriage. In addition to marriages, the Keristans shared everything – parenthood, money, and personal growth processes.

The members owned and operated a business selling computers. During his tenure there, Ryam Nearing said he lived in a community that tried to provide emotional support for everyone. Nearing was involved in finding a vision for Keristan that “started with twelve but then amplified it to twenty-four adults per family in their ideal – the goal they wanted to aim for” (Nearing, personal communication , 2003).

Informal and organized prototypical polyamorous support groups began to spread in the 1970s, the best known of which were Family Synergy in Los Angeles and Family Tree in Boston. Inspired by science fiction writer Robert Heinlein Stranger in a strange land, Oberon and Morninglory Zell founded the Church of All Worlds and its Ravenheart Clan, still influential in the polyamorous movement today. Individuals created organizations focused on polyamory or polyfidelity, such as Nearing’s Polyfidelitous Educational Productions (PEP), a group in Denver called “Beyond Monogamy” that met regularly and released an edited volume, and Deborah Anapol’s IntiNet. Nearing and Anapol then teamed up to create love more magazine and nonprofit (which later became Nearing’s solo project and has since gone through several publishers) that has published articles, poetry, and personal advertisements for, by, and about polyamorous people.

Swinging, group marriages, communes, and polyamorous communities all contributed to the rise of the second wave of CNM in the United States in the 1960s and 1970s. In the 1980s, the sexual revolution entered into collision with the spread of AIDS and other sexually transmitted infections, and the resulting backlash has driven discussion of group sex and multiple partners out of mainstream society. Academic research on sexually non-exclusive relationships declined significantly during this period. Although very few such studies were published during the 1980s and 1990s, the practice of consensual non-monogamous relationships endured. Only a decade later, the first glimpses of Internet communications began to breathe new life into CNM communities in the United States.