Jane’s Revenge, a pro-abortion domestic terror group, says it attacked pregnancy centers in California and Vermont over the weekend. Their menacing rhetoric of hate is intensifying and now threatens to target pro-lifers in their homes while calling the vandalism ‘absolutely titillating’. A message suggested supporters to “[l]earn the skills of a speed bartender” and added, “Next time we’ll bring it the Wisconsin way” – a reference to the arson attack at the offices of Wisconsin Family Action.

The Abolition Media blog, which was the catalyst for Jane’s Revenge reporting, published this statement (as did Anarchist News) on June 27, which the blog claims to have received via email:

The night of June 24 was the Night of Rage. We decided to attack an emergency pregnancy center in Glendale, California with spray paint. The sentences written were “Jane was there”, “interrupt the court” and “If abortions are not safe, neither are you”. Across the country, people protested and revolted against this attack on bodily autonomy.

As we predicted nearly a month ago, the United States Supreme Court has stripped millions of people of bodily autonomy and access to abortion. This is only the beginning of the attacks on autonomy in store by the courts and the fascists. Next on the chopping block is access to contraception, the legality of queer everyday life, and same-sex marriage. But it’s part of a larger pattern of fascism in the United States.

The memo then threatens to attack pro-lifers in their cars, homes and where they live (emphasis ours):

This attack is nothing compared to what awaits you. A little spray paint will be the least of your worries. For decades you have bombed abortion clinics and murdered doctors. We fight not only for abortion rights, but for trans liberation, ecological harmony, decolonization, the destruction of white supremacy and capitalism, and the uprooting of all global civilization.

We are going to hunt you down and make your life hell. You started this war but we will win it. Until now, they were just pregnancy crisis centers, but tomorrow, it could be your cars, your homes, or even your lives. We support a diversity of tactics and we will not retreat from this fight.

It is signed “Wait for us, Jane’s Revenge”.

Although the memo did not name the PRC attacked, the Tree of Life pregnancy center in Paso Robles, Calif., was vandalized over the weekend. Police told KSBY.com they believe the vandalism may have occurred in light of the Supreme Court’s decision to overturn Roe v. Wade sometimes between Friday evening and Saturday morning. According to Paso Robles police, Tree of Life received a letter from Jane’s Revenge.

Again, Abolition Media Blog released another statement on June 27. This one reads (edited for profanity):

Following the Supremacist Court’s laughable attempt to control millions of bodies with the arbitrary and retroactive reversal of its own decision on Roe v. Wade, in addition to new threats against the queer community made by a certain Supreme Pig, some of us here in the so-called ‘Burlington, Vermont’ (colonized Abenaki land) have decided this is the right moment to remind the tyrants that we are everywhere and that we will not be laughed at.

The group then falsely attacks pro-life pregnancy centers that offer free services to women in need, writing, “We learned months ago that there is an anti-abortion clinic here in town doing pass as a safe place where pregnant women can receive care. and resources. Their tactic is to lure vulnerable people in with emotionally manipulative messages about “support without judgement” before pulling the old lure and changing and doing whatever they can to guilt people into completing their unplanned pregnancies.

The statement then takes credit for vandalizing a pro-life pregnancy center:

The impact of the concrete chunks on those old colonial window frames was absolutely titillating… We knocked once, disappearing into the darkness before emerging from another direction and knocking again. A veritable volley of crashing and shattering sounds filled the neighborhood and our gay hearts to the brim. This town’s tired, self-satisfied hippie liberalism is a big part of what allows organizations like this to stay in our community and hurt the vulnerable. We say: fuck that. No more.

The image below has been published but the name of the establishment has not been revealed.

It’s time for a real fight. Gather your friends and collect heavy stones. Learn the skills of the speeding bartender. Decentralize your actions – step into the night and be wild with joy! This is the fight of our lives and it has only just begun. This time it was concrete slabs. Next time we’ll bring it the Wisconsin way.

The post ends by claiming that “Jane’s Revenge lives!”

The “Wisconsin-style” verbiage refers to the firebombing of Wisconsin Family Action, the first victim of arson by Jane’s Revenge, which later took credit for burning down the facility. Last month, a Molotov cocktail was thrown at the offices of Oregon Right to Life. On June 6, the perpetrators spray-painted the message “Jane was there” when they burned down CompassCare Pregnancy Services in Buffalo, New York. Then, on June 11, a pro-life pregnancy center in the Gresham, Oregon area was also set on fire, but no message was left. And on June 25, Life Choices Pregnancy Center in Longmont, Colorado was another victim of arson, as was St. John Neumann Catholic Community Church in Fairfax County, Va. (June 26) . No one has yet claimed responsibility for these attacks.

Additional messages from Jane’s Revenge have been released in recent days, as detailed in Live Action News below.

Posted to the Jane’s Revenge blog on the morning of June 25, one of the terrorist group’s communiqués read: “Anyone who feels like painting, burning, cutting, blurring: now is the time. Go forth and manifest the things you wish to see. Stay safe and practice your cursive…. It appears to be an abbreviated version of a previous message.

A Tweeter which included the blog link told Jane’s Revenge supporters to “[f]Find each other and stay dangerous. A separate Tweeter suggests demonstrating on the 4th of July. “I am absolutely disgusted and we as citizens should be angry. It affects more than abortions, and it was NEVER about babies,” it read. “Make the 4th of July a day of protest and not celebration for a pathetic nation. Be loud and fight. #JanesRevenge.”

In May, an alleged Jane’s Revenge cell in Oregon released an open letter to its supporters claiming the domestic terror group was “not just a group” but also an “idea” that “plans only for s ‘intensify”. The Little Larck Memorial Cell open letter, sent to Live Action News from a source choosing to remain anonymous, was reportedly published by a University of Oregon student magazine.

The statement from the Oregon cell alleged that it was “passed on from an anonymous source” to the student group. It is aimed at “Student Insurgent readers and reproductive rights advocates around the world.” The post, written ahead of the ruling in the Dobbs case, called the Supreme Court justices ‘black-robed ghouls’ and claimed women’s rights had been ‘sacrificed on the altar of the ‘unborn’ “. See below : 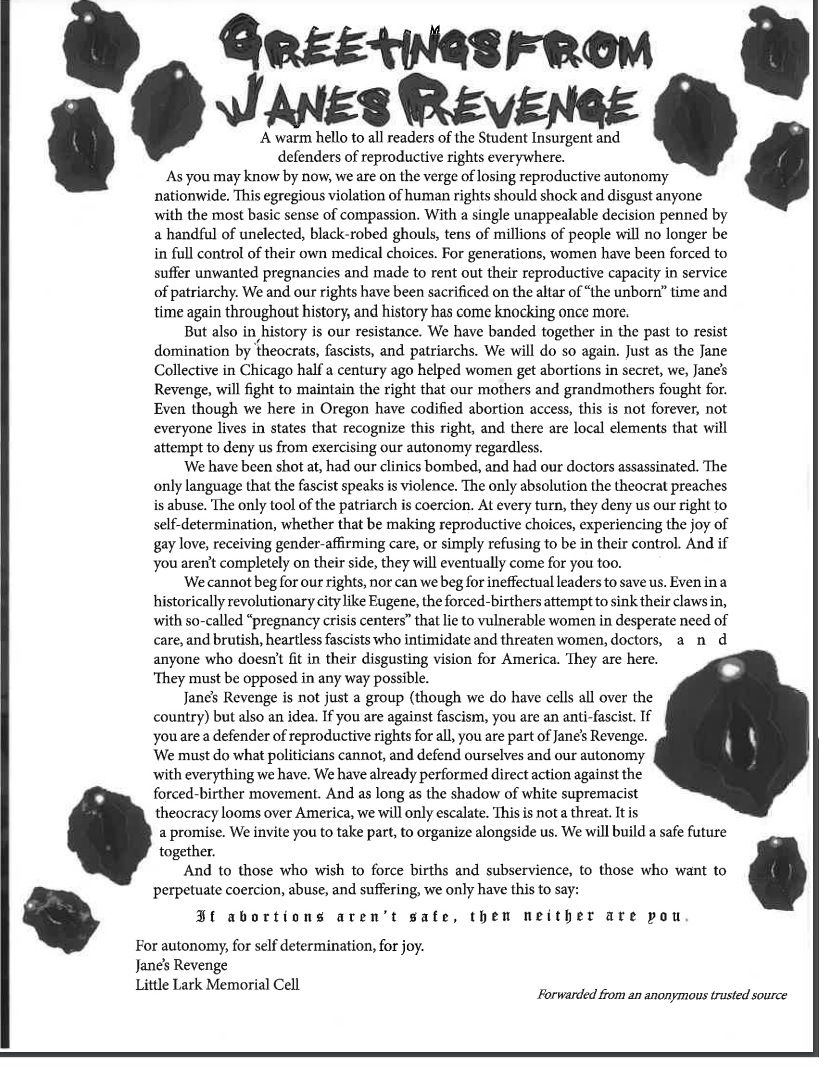 “Even though we here in Oregon have codified access to abortion, it’s not forever,” the post read. “Not everyone lives in states that recognize this right and there are local elements that will try to prevent us from exercising our autonomy regardless. We cannot beg for our rights, nor ask ineffectual leaders to save us. Even in a historically revolutionary city like Eugene, forced midwives are trying to sink their claws, with so-called “pregnancy crisis centers” that, according to the memo, “must be fought in every way possible.”

The message then falsely claimed that pro-life pregnancy resource centers “lie to vulnerable women in need of care”. These centers actually provide free services to hundreds of thousands of women each year – and whenever a facility is attacked, burned or otherwise taken out of service, the women, families and children who need compassionate care and magnets are the real wounded.

The message continued: “Jane’s Revenge is not just a group (although we have cells across the country) but also an idea… If you are an advocate for reproductive rights for all, you belong to Jane’s Revenge. We have to do what politicians can’t, and defend ourselves and our autonomy with everything we have. We have already taken direct action against the forced childbirth movement. And as long as the shadow of white supremacist theocracy hangs over America, we will only get worse. It’s not a threat. It is a promise. »

“And to those who wish to force births and enslavement, to those who wish to perpetuate coercion, abuse and suffering, we have only this to say: if abortions are not safe, then neither are you” , said the message before being signed. , “For Self-Reliance, For Self-Determination, For Joy, Jane’s Revenge Little Lark Memorial Cell.”

Live Action News previously interviewed an expert who said the domestic terror group should be “seen through the prism of terrorism”.